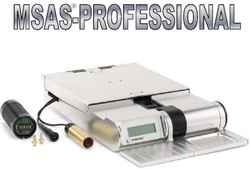 It went like this: the patient would lie prone and I’d check to see which leg was shorter than the other (there is always a short leg). Once that baseline was established, I would place a testing vial in their hand and observe the leg length again. If the short leg became shorter, meaning the patient’s body didn’t like what was in the vial, I would perform the treatment. If the legs didn’t even out, I’d repeat the treatment.

There’s more to how inefficiently my treatment was back then, but I’m sure you can already see that doing things manual … is … so … slow. You’re also limited to what you can test and treat for by the number of testing vials you own. And testing vials are expensive. Lastly, you can’t be very specific when you’re using pre-loaded testing vials.

What I mean is, if a patient reacted to a vial called TREE POLLENS, that vial might have 200-300 different pollen samples in it. What if they’re sensitive to only 50? You’re stuck having to treat for the whole vial, and in my opinion that significantly weakens the effectiveness of the treatment. The more specific the treatment is the better it is.

In those days it was common to have to treat many vials multiple times over multiple visits.

Then, in 1999, I met a representative from BioMeridian who was demonstrating the MSAS-Professional. (I believe BioMeridian is now Integrative Health Technologies.) I purchased one on a lease-to-own program.

(These impressions are for the machine I bought back in 1999. I’m sure IHT has improved the hardware and software since then.)

What I liked about the MSAS-Pro

I appreciated having the MSAS-Pro at the time because it was far better than doing things manually and I could help more people in more ways. But when the ZYTO Elite came along, the MSAS-Pro went into a box in the closet, never to see the light of day again.